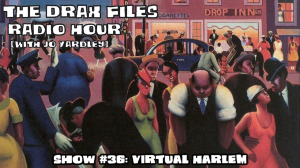 a fascinating conversation with bryan carter, the mind behind virtual harlem, about identity and ethnicity in virtual reality, about time travel, immersive education and generally about where the train is headed:

and here are links – as per usual – for your further investigating pleasure:

– mapping your interior in 3d with a heavy clunky backpack: meet goggle trekker!

– overview of the harlem renaissance

– wonder what is a cave? wonder no more!

– confederation of democratic simulators is celebrating 10 years in sl

– my first machinima made about cds [i used to live in colonia nova at the time]: